How many times have you heard the phrase “get in touch with your emotions”? or “embrace these emotions!”

It seems to be something that we all should be doing….

Shouldn’t we be able to manage our emotions so when we want to change our mindset and change our mood – is something that we as people, can do?

It’s like they’re in a abusive relationship with their emotions. 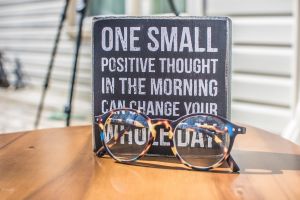 There will probably be times when you know you are going to face a “trigger” – something or someone who will press your emotional button and the emotion kicks in. It could be anger, hurt, sadness, frustration – anything – but it’s an emotion you don’t want to feel.

So – by planning ahead and being ready or by doing something different – you can deal with that emotion or not even have to encounter it.

For example – there may be a person that seriously annoys you, winds you up – and you know that if you go into the office or the gym or wherever – they will be there. Why put yourself in a situation that makes you feel crap – if you don’t have to? Why not go into the office at a different time, or do your gym on a different day?

If you can’t avoid them – then get your mind working for you- not against you. So when you’re in the office and they’re there – put your mind elsewhere – or even think about them in a different way. The best advice I was given was from an old boss who told me to imagine people naked wearing only socks and a hat…. Now – this may work for some!!!

Sometimes the simplest thing is to focus on your breathing and breathe slowly…. It slows everything down and stops the adrenalin pumping – so stopping the rush of a negative emotion.

When you get that feeling of dread or dislike or anger – maybe it’s time to step sideways and look at the person or issue from a different angle.

As I said previously – why put yourself in a situation you don’t want to be in – it only leads to resentment and pent up anger.

So – perhaps delve more into who the person is – maybe even ask yourself why they act as they act.

An example of this is – I worked with a woman for a year or so and she really did wind me up! She was so “in your face” – whatever I did – she questioned, she was always right.. She had to be the centre of attention. I really did not like her.

It was only after going on a course with her – which I was seriously dreading – that I saw a different side to her. She was massively insecure and always needed that reassurance. She had to be right as being wrong was deemed as failing.

Did I see her in a different light? Yes. Did I like her any more? Not really – but I did manage to deflect her behaviour more.

Same when you’re thinking about a situation that freaks you out. Stop and think about something else that you’ve encountered and got through – then take that feeling and use it there..

3) Find the ‘tipping point’ or the lengthen the “fuse”

Emotions have that ability to surprise us, creep up on us from behind and, before we know it, have us thinking, feeling, doing, and saying things we don’t want to.

It’s not always easy to see, but there is always a ‘tipping point’ or that point where you feel the fuse is going to light. Before we get to it, we can always backtrack. But once we have reached this point, it becomes more and more difficult to stop the slide into the pool of emotions or the fuse lighting and the dynamite in your head exploding!!

So what can we do?

Well a simple way is to detach yourself from the situation. You may be standing there physically but you can take your mind anywhere you want. It’s like standing in a queue – some people get inpatient and some stand there and drift off into a daydream… So drift off – what happens is that you begin to see the situation from an outside viewpoint.

We use cookies to ensure that we give you the best experience on our website. If you continue to use this site we will assume that you are happy with it.Ok